Tindall held off point leader Chris Morris to claim the IMCA Modified A Main; Egbert made a last-lap pass on 2020 champion James Hanusch to claim the IMCA Southern Sport Mod feature, while Painter outgunned Tim Homeyer for top honors in a thrilling 20-lap feature for the Gunslinger Factory Stocks.

Tindall, of LaGrange, started on the pole in a 16-car field and quickly checked out on his rivals. Morris started 10th in the 20-lap tilt and settled for second, while Trevor Egbert filled out the podium in third. Defending champion Hardy Henderson and Cody Tidwell completed the top five.

“That was an amazing race,” an almost overwhelmed Tindall said. “Any time you can have an Egbert pass you and be able to get back around him for the win is a career highlight. Those guys are fast and have been doing this a long time. I need to thank my Dad for this one, and everybody who helps me.”

Finishing sixth through 10th in the caution-free IMCA Modified A Main were Derek Scott Jr., Raymond McSpadden, Brandon Welker, Foster Ellison and James Bohannon. The Modifieds were by far the best behaved division of the night, with big speed and respect shown to each other all evening.

Egbert, of Salado, started eighth in a talent-filled 22-car field and had to get up on the wheel to record his victory. Hanusch was aggressive throughout yet settled for second, while I-37 promoter and veteran racer Johnny Torres made the long haul up from San Antonio pay off with a solid third-place finish.

“I'm pretty excited after that one,” Egbert said in Kragh's Jewelry Victory Lane. “I've run a lot of races this year, but this one, wow. To be able to come out here and do this, that was just awesome. I need to thank my family and crew, and thank the fans for coming out to see us tonight.”

Finishing sixth through 10th in the IMCA Southern Sport Mod A Main were Joe Maple, Taylor Florio, Greg Atwood, Tom Grothues and Todd McLemore. Only two cautions slowed the pace, the second at lap 16 when Robert Stewart's car showed flames under the hood and ground to halt coming off Turn 2.

Painter, of Austin, prevailed in a thrilling battle with Homeyer that may have been the best display of driving talent all evening. The cagey veteran led the first 16 laps, only to have Homeyer blow by on the outside with just three laps remaining. At the line, it was Painter, Homeyer and Allen Torres in third.

“I was suffering on the restarts with a carburetor issue,” Painter said. “I know Tim is always tough, but he races clean. As long as I could get fuel to the engine, the car was capable of competing for the win.”

Over 135 cars jammed the pit area at Cotton Bowl, approaching the all-time record of 144. With 28 Factory Stocks, 22 Sport Mods and Dwarf Cars, 21 Street Stocks (the rained-out Texas Dirt Truck Series joined the Streets Saturday to get some seat time) and 18 Mods on hand, officials were busy.

Cotton Bowl Speedway swings back into action in two weeks with the Memorial Day Classic on Saturday, May 29. You can replay all of the action from Saturday night with a subscription to SpeedPass at RaceOnTexas.com. Catch over 100 Live races in 2021 from across Texas and Louisiana. 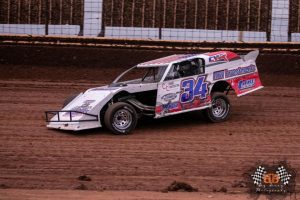 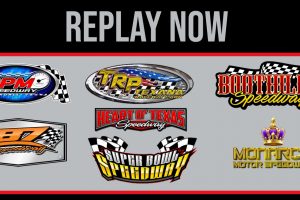 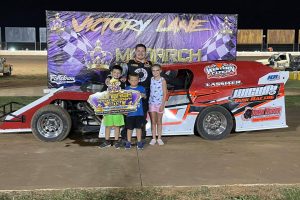