Painter, of Austin, slipped past a late-race melee to win the 20-lap Factory Stock feature. Tryton Temple, of Corpus Christi, was leading at lap 18 when a spin in front of him forced him up high to avoid a collision. He hung on for second, while Kevin Battarbee filled out the podium in third.

“That was a lot of fun racing up front with those guys,” Painter said in Kragh's Jewelry Victory Lane. “I had been trying to find a hole to get through. I was trying to work the bottom in Turn 2, but just couldn't get off the corner well enough to make a pass. When Tryton moved up, that hole appeared.”

Finishing sixth through 10th in the Factory Stock feature were Kyle Carter, Monty Chamberlain, Mason Doherty, Curt Ellis and Rusty Head. Only one caution slowed the pace when Eric Robbins put his machine into the spin cycle. Doty led the first 13 laps until he wanted a closer look at an infield tire.

“My Dad and I were able to work on the car this past week, and it all came together tonight,” Pontin said. “We were lucky enough to draw No. 1 for the Heat race, so that was good. I'm glad we were able to run away and hide in that one.”

Finishing sixth through 10th in the thrilling Sport Mod A Main were Don Painter, James Hanusch, Joel Garcia, Rick Wolfe and Taylor Florio. Only one caution slowed the pace at lap 12 when 2020 Sport Compact champion Rowdy Chouinard and Duane Owens spun in Turn 4. Pontin's margin of victory over Egbert was a scant .680 seconds in a crowd-pleasing finish.

Scott, of Franklin, drove inside of early leader Dillon Tindall at lap 12 and hung on to claim the IMCA Modified feature. Scott started third on the 13-car grid and quickly moved into contention. Chris Morris applied the pressure throughout yet settled for second, while Cody Tidwell finished third.

“My car was a little too tight,” Scott said. “I was trying to run the bottom, but that just wasn't working with a tight race car. I had to be patient, I waited for my right rear tire pressure to come up and then took off. I feel like we were really good after that. I did lose my rear brakes in that final caution.”

Finishing sixth through 10th in the Modified feature were Robert Sanderson, Thomas Hall, Allen Deen, Dillon Tindall and Lightning McGreen. Only two cautions slowed the pace, neither for serious incident. Scott's margin of victory over Morris was a healthy 2.357 seconds.

Other feature winners on a dry but very windy Opening Night at Cotton Bowl include CJ Gray (Street Stocks); AJ Dancer (IMCA Stock Cars); and Dylan Kowalik (Sport Compact). The entire six-division program with Hot Laps, Heats and A Mains was completed by 10:50 p.m., a notable stroke of business.

Cotton Bowl Speedway returns to action on March 19-20 with the World of Outlaws Sprint car series. Their next scheduled points race for all regular weekly divisions is set for Saturday, March 27.

You can watch every race LIVE and replay the complete event with a SpeedPass membership. Click here to replay now! 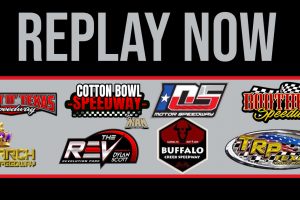 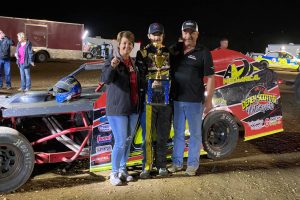 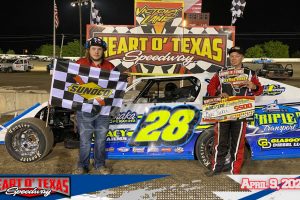