ALTUS, Oklahoma — While I recently made a case for the potential of Late Model racing to thrive once again in south Texas, the fact remains - it's the IMCA or USRA Modified that's King in much of the Lone Star State. Has been, and probably always will be. They are very exciting to watch.

From Corpus Christi to Wichita Falls, from El Paso east to the Louisiana border and at just about every  track in between, those open-wheeled ground-pounders are the cream of the crop. Among the drivers wheeling them is an eight-year veteran racer from Oklahoma who's absolutely on fire in 2020.

For 28-year-old Kale Westover, the new season has brought success in two states. In 13 starts racing at Monarch Motor Speedway (MMS) in Wichita Falls, TX, Lawton Speedway in Lawton, OK, and at Southern Oklahoma Speedway in Ardmore, OK, Westover has an impressive eight wins to his credit and three other top five finishes.

He's leading the points at MMS, and says there are a number of factors responsible for the strong start.

“I think it's a little bit of everything making the whole package work right now,” Westover said. “Me and my Dad do this together, he raced for 20 years and is very smart. We're out here in the shop seven days a week working on race cars. If we ever get behind on something, we work hard to get caught up.

“I'm driving a brand new car this season built by our partners at Western Flyer Race Cars. It's a top-notch piece, and things are coming along very quickly. We're definitely working with the right people. We've really put together a package that's been working very good for me.”

Westover is a second-generation racer with a rich history and very interesting background in the sport.

“My Dad did a lot of asphalt racing, including at the local track here in Altus, Oklahoma, ” the proud son explained. “One day he asked me if I wanted to hop in a race car, and that's when we started doing this together. I started out in the United States Super Truck class. I cut my teeth there for a couple years.

“That kind of died out when car counts dropped off to six or eight. We actually got to go to the Texas Motor Speedway once, and Steve Whiteaker Jr. ended up winning the A Main. My Dad and I were just standing there watching, and I knew right then I wanted to race on dirt. The competition was intense.”

Despite his current dominance in the division, Westover says staying on top in Mods takes a big effort. That transition from pavement over to dirt early in his career brought along new challenges, as well.

“This dirt deal takes a whole different package than asphalt racing,” he said. “It took me while to learn the driving style, but it's a whole lot easier for an asphalt driver to adapt to dirt than it is for a dirt guy to adapt to the asphalt. It's a big learning curve, but I've had a lot of great guidance.

“I've been around the right people who have pointed me in the right direction. They have helped me adapt quicker than most people could otherwise. I've been very fortunate in that respect. As far as staying ahead of the competition, the work never ends. You have to do the maintenance every week.”

Those USRA Modifieds are pretty advanced cars, so keeping up with changes can be a daunting task.

“The technology advances so quickly, you really have to stay on top of it. With the Modifieds, you have so many extra things to keep track of. It's all critical; one week you may be King, but get just a little bit off on some of the technical adjustments in the setup, and the next week you could get lapped. That's how quick things can change with the Modified.

“I've got an extensive notebook, and we refer to it all the time. We record every change we make and how the car reacts. If you don't, you'll get left behind. This division requires a constant effort to win.”

Along with his races a little closer to home in Lawton, Westover enjoys competing at MMS and has good things to say about the fine facility in Wichita Falls.

“Misty and Shannon Kelton and their staff have really turned that place around,” he said. “They are getting now to where they are reaching out to the local population to draw some new fans. They promote the place very well and are making it a family-friendly environment. I applaud their efforts.

“As far as the track itself, it's been racy every time out. It doesn't get rough, and I love to drive there. I feel the Kelton's have taken all the right paths to make Monarch Motor Speedway a great place again.”

While a few Texas race teams are fortunate enough to have several folks volunteer time, Westover has a smaller, family-oriented unit. Sometimes, it's the skills and dedication of those you have over numbers.

“I do have a very small crew, but they are the most dedicated and skilled guys I could ever ask for,” Westover said. “First off, I need to thank my father, Dean Westover, for all he does for my race team. I couldn't do this without his help. I also want to thank Logan Morschhauser for all he does for us.”

Along with those two priceless and devoted crew members, Westover has a nice group of marketing partners who help make his program so successful.

“I am fortunate to have some very fine companies on board in 2020, including Wichita Tank Racing, 44 Drywall, Ace Energy, Dr. Michael Steven Hayes, Jimbos Liquor, Knowles Performance, On Another Level Designs, Western Flyer Race Cars, Dark Horse Racing Shocks, Kamko Plumbing, Wyatt Sheet Metal, Bilstein Racing Shocks, Reeds Transmissions, Landrum Springs and Lassiter Concrete. I appreciate every one and try to represent them in a professional manner, both on and off the track.”

As we appraoch the official start of summer and the action heats up in Oklahoma and north Texas, Westover has some specific goals in mind.

“I don't actually race for points anywhere in particular,” he concluded. “I prefer to chase the big money shows. I feel the focus has shifted from the 1980s and 1990s when championships meant so much to people. Today, I feel that you get more recognition by winning those big purse events.

“My biggest goals for the balance of this season are to make as much money as I can and win a few of those bigger races. If we can keep on running like we have, I think we'll have a pretty good shot.” 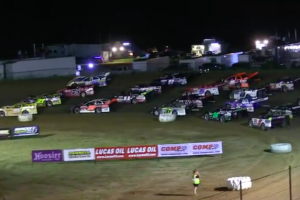 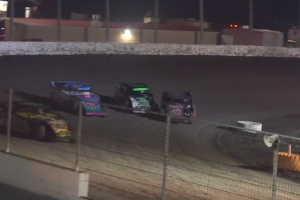 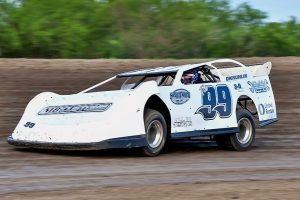 Frank Okruhlik on a roll in Late Models for 2020