KAUFMAN, Texas — You don't have to look very far into the pit areas at tracks like RPM Speedway, Buffalo Creek, Kennedale Speedway Park or at Big O Speedway to realize the depth of talent spread around north Texas is off the charts.

For 33-year-old USRA Limited Modified regular Justin Vaughan, battling against some of the toughest racers in Texas each week is going pretty well. In 12 starts this year, he's earned two wins, three top-five and five top-10 finishes. He's a proud new papa with a full plate in life, but he's having a blast.

“I think there are a couple of reasons we're doing so well this spring,” Vaughan said. “I've always heard that races are won in the shop, and I understand that now. I just came in from the shop tonight, in fact. Doing your weekly maintenance is so critical; you can't win races or earn top-fives if your car quits.

“Another reason we're off to this strong start is the gains we're making with this Express race car. I got this one late last year, worked on it a lot during the off-season, and it's really starting to come around for us this year. A good car, consistent work in the shop and a supportive team are producing results.”

Vaughan is one of those successful racers that doesn't have decades of experience under his belt. You may think he's been there, done that when you look at his numbers, but he's actually just getting started.

“I'll be honest, I've only been racing for about two and a half years,” Vaughan explained. “I'm still learning, but feel like I'm making progress every time out. It's definitely a very competitive sport.”

As mentioned earlier, Vaughan is a big proponent of the brand of chassis he owns. While other brands have good reputations, as well, he's hooked on this one for a couple of reasons.

“I've had this Express car for about eight months now,” Vaughan explained. “It's a 2012 chassis, but it is a very well-built and stout piece. I'll say this now, Shane Hebert has completely won me over. The next new car I purchase will definitely be another Express. His customer service really blew me away.

“The first night we put the car on the scales, it was so far out in left field, we didn't know what to do. Even my crew chief, Bryce Pritchett, was stumped and ran out of ideas. It was about 10:30 at night, but I called Shane anyway. He answered every single question, and got us squared away.”

Guidance received from the chassis builder got them headed in the right direction, and they were off.

“It gave us a good baseline setup to start from. Bryce told me to drive it and he would fine-tune it to my driving style. I've been giving him feedback, and he's tweaked it to where I'm happy with it. Shocks are a huge part of the handling equation now, and I'm on board with Mo Bags Suspension Technology now.

“Morgan Bagley is helping a lot of racers improve their performance, and he's helping me big-time. I didn't even know what I had for shocks at first. I went with Mo Bags last winter, and I'm glad I did it. I won the first night out with his shocks, and I knew I had a Hot Rod. I knew this could be a good year.”

As for horsepower under the hood, Vaughan says it takes more than a 'Spec' engine to get the job done.

“I don't like the crate engines, so we built an open motor,” Vaughan explained. “Gary Dent with 3D Motorsports out of Longview, built this engine we have now and it's running very well. It's not a $12,000 top of the line motor, but it's not a $2,000 junk, either. It does everything I need it to do.”

That depth of talent and intense level of competition in north Texas is a subject Vaughan knows well.

“I actually have two home tracks, I guess you could say,” Vaughan explained. “RPM and Buffalo Creek in Canton, Texas, are my two favorite Friday night tracks. They alternate on different weeks so as not to conflict with each other. So whichever one is running, you'll find me there on Friday night.

“As for Saturday nights, I started going to Kennedale Speedway. They are an IMCA track as opposed to USRA like I normally run, but the competition there is top-notch. If you can be competitive there, I feel you can win anywhere in the state of Texas. It's competitive at RPM, as well, but Kennedale is tough.”

Along with his burning desire to succeed in racing and that finely-tuned race car, Vaughan also has a few key people working behind the scenes to keep his program on track.

“I do this out of my own pocket, and with my wife's support,” Vaughan said. “My Dad helps me out a lot, as well, he is there every weekend. This is very much a family-run team. my Mom helps out, as well. I also need to thank JT's Tire & Service, Arty & Sons Paint and Body, and Yellowbox Dumpsters.

That family recently got a little bigger, as Justin's wife Ashley gave birth to a beautiful new baby boy. Kaine Taylor Vaughan joins his older sister (Paisley Grace) in this awesome racing family. The pride this racer has in his family can be heard every time he speaks, something we all love to hear.

“My daughter wasn't really all that interested in my racing at first, but she has gotten more into it now. I think being there when I won changed her tune; now she thinks Daddy should win every race. Dad thinks he should win every week, as well, yet I know the competition in this division is pretty tough.”

With the season now in full swing, Vaughan has one particular goal he'd like to achieve in 2021.

“I really didn't have any specific plans at the start of this year,” he concluded. “But now I think a points championship would be really nice, maybe at Buffalo Creek. If I earn one at RPM, I'll be surprised just due to the level of competition there. I'd be happy if could get five or six wins, and just have fun.” 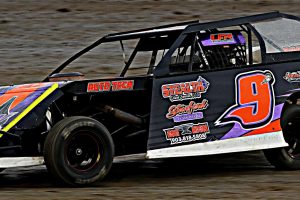 Brandon Geurin: A model of speed, courage and consistency 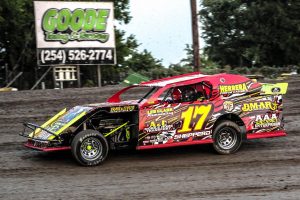