KINGSVILLE, Texas — It's been the hot topic of conversation for much of the 2020 season in Texas, and for good reason. The explosive growth we're seeing in Factory Stock this year is putting more and more drivers in the spotlight, showcasing talent from all regions of the Lone Star state.

For 41-year-old Joshua Sewell, the new season has been and up and down journey, filled with highs and lows. This past weekend, things came together nicely for the easy-going driver from Kingsville.

Sewell drove to victory at I-37 Speedway on Friday, then completed the sweep with his second straight win on Saturday night. Never one to throw in the towel, Sewell has kept his focus and stayed vigilent. In 15 starts, he's earned two wins and seven top fives.

“It's been kind of a hard road for us this year, but to have it come together like it did last weekend made it feel extra special,” Sewell said. “We've had several second-place runs, but just couldn't quite seal the deal before now. The competition in this class this year has gone through the roof.”

As the division grows, winning features just gets harder and harder to pull off, no matter where you are.

“I've thought about last weekend's success a lot,” Sewell added. “I could not have planned it any better, it just all worked out in our favor. With all the ups and downs and the stiff competition we face, those back-to-back wins were more rewarding and satisfying than I can describe. It was an amazing feeling.

“Down here in south Texas, all these boys have really stepped up their game this year. I used to work for Tommy Temple Racing, and I feel like we had an edge on the competition last year. I earned six wins, but this year has been much harder. We're working hard to stay competitive in a very difficult division.”

Now in his fifth full season of racing, Sewell got his start in the Pure Stock division.

“I bought my first race car for $2,000 and thought it was awesome,” Sewell explained. “We spent an entire winter rebuilding it and getting it ready to roll. I won Rookie-of-the-Year at both tracks we ran, but never won any races. It was a good way to get my feet wet in the sport.

“After a couple of seasons in that car, I was able to trade it for an E-Mod. I had a lot of success with it, winning five features my first year in the class. As I was driving that E-Mod, I was also building my first Factory Stock entry. I've always loved the big full-fendered cars, so that's the direction we went.”

With the exception of a few guys like the ultra-talented Dalton Faulkner, who wins across the state in a car he built himself, the days of winning features on a regular basis in a home-built car are gone. On most nights, it takes a professionally-built car with a high-end, hand-built engine to get the job done.

“This year, we have a new Outlaw chassis and I just figured we were going to come in and be fast right away,” Sewell said. “Thing is, they all have a new chassis and plenty of horsepower now. We're starting to get our car figured out, and we have an excellent local engine builder who does very well for us.

“Along with that great power, we also have KH Suspension on board this year. To have guys like Nick Kerlin and Texas native Blake Harris working on our shocks has been huge for us. They are a couple of great guys and put out top-notch products. Our car really came to life with KH shocks this season.”

That increased level of competition in this class is forcing everybody to improve their programs. Racers like Faulkner have given guys like Sewell something to shoot for in their careers.

“It's a huge challenge for guys like me, because the bar has been raised to new heights,” Sewell said. “Guys like Dalton seem almost untouchable to me. You watch that man, and he's as smooth as silk out there. He does everything he needs to do to win. That's a pretty hard act to follow for most people.”

Along with his natural talent behind the wheel, Sewell has a couple of key people behind the scenes who keep his program moving forward.

“We have a very small race team here,” Sewell explained. “It's really just me, my father, Richard, my mother, Donna, and my girlfriend, Danea Reopelle,” Sewell said. “I first got the racing bug thanks to my Dad, but he's no spring chicken. I'm very thankful I still have him here helping me and guiding me through this journey.

“He's at the track every Saturday night by my side, doing whatever needs to be done. I thank God for that, because you can't do this stuff on your own. A lot of guys have big teams, lots of buddies and plenty of help. I'm just thankful I have my Dad and my girlfriend supporting me through it all.”

Along with those dedicated folks on his team, Sewell also has a fine group of marketing partners on board to make his program more competitive.

“I need to thank Ace Automotive Machine, KH Suspension, Outlaw Race Cars, Wildcat Fluids, 2 Jacks Racing, McDonald Sales & Salvage, Flanagan's Muffler Shop, Continental Batteries and Tommy Temple Racing (TTR). I couldn't do this without their support and appreciate all they do for me.”

As this rather strange yet competitive and highly entertaining season rolls on under a scorching Texas sun, Sewell has goals and plans to execute in the coming months.

“Once we conquer this consistency thing, we're planning to run hard for points at I-37 and also to compete in some of those bigger shows this fall,” Sewell added. “We're already committed to running up at TMS, and may hit a couple others depending on available funding.

“It just feels good to finally be back in Victory Lane, and to know we're on the right track. I'm blessed, happy, and ready to get after it again with a little more confidence in my pocket.” 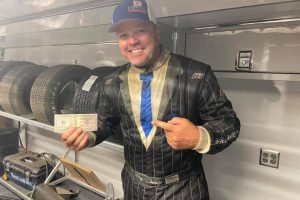 Trevor Cogburn on a roll in Junior Limiteds