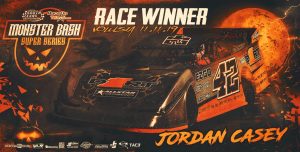 The opening ceremonies tonight sure did remind all of us dirt track racing fans, that we live in the greatest country on earth. After five heat races, and two last chance races, twenty-three drivers would take to the grid, and form a perfect four wide salute to the fans and all of our Veterans on this Monday, November 11, 2019.

To all of those who have served, those who are currently serving, we thank you for all you have done, and all you continue to do.

After running the fastest lap in practice, a 15.715, the Ronny Weaver owned double zero of Kendall Tucker will maintain one of the fastest times of the night. After the track wears in, Blake Cannon in the number forty four, will throw in a last minute qualifying time, and take over the top of the charts with a 16.340.

Your pole sitter for the feature is the number two of Dylan Houser, Dylan Wilson to his outside, Hayden Cardwell sweeps third, and “Kid Excitement”, Jordan Casey sits outside row number two. Starting in fifth, Ryan Underwood, with Fairbury winner, Blake Cannon to his right. Row number four sits, Austin Matthews and “The Champ”, Blake Matjoulis, over Chad Swarts and Eldora feature winner, Kendall Tucker. Barrett Bishop and Mike Molnar start in positions eleven and twelve and lookie here, Scott Dobbs has made the feature and starts in lucky number thirteenth. Clifford Driskel starts to Dobbs outside, with Dirty Grass Soul front man, Kevin Dedmon inside the eighth row, Mason Crawford to his outside, over Austin Carr and JD Brown in eighteenth. CJ Phillips starts inside row number twenty alongside Kyle Sirratt, TJ Carter, Ryan Diatte and Topper Dugas will round out your field tonight here at Volusia.

After our admins getting these guys lined back out after that amazing four wide salute, we get ready to go green for sixty green flag laps with Houser and Wilson, leading off Cardwell, Casey and Underwood.  Dylan Houser and Dylan Wilson waste no time, as the bottom of the track wears in, there’s some contact in the back of the pack, but we remain green. Ten laps in, caution flag is out, and we see Austin Matthews falling to the back of the pack.

The green flag barely hits the fresh air, with Houser leading us off, and just that fast we are under caution again, after Houser drops low on the track, the one twenty seven of Matjoulis makes contact, leaving a parking lot on the track, and Tucker just hanging out on his lid in turn one. This leaves the lead now to Hayden Cardwell, with Dylan Wilson, Casey, Bishop and Crawford in fifth.

Cardwell straight up the middle, Wilson close in tow, Casey along the bottom, with Crawford hooked to the bumper, setting up for three and four wide racing shortly. After the biggest “Send it” moment, Barrett Bishop gets it going, possibly ran out of track, loses a few positions, and will find himself door to door with the forty four of Blake Cannon. Cardwell holds on to the top spot, with Wilson battling it with “The Missile” down low, and will get the pass for second, and Casey just waiting to get that D1RT up to the front with the half way mark now in the books.

Jordan Casey starts setting up the slider line, getting the pass on Crawford for second, and will now have tunnel vision on Hayden Cardwell. Blake Cannon gets the signature slide on Barret Bishop, bringing him alongside Crawford, and is hungry for his second win this season. The forty two of Casey drops way low and gets the pass on Cardwell for the lead, leaving Dylan Wilson strategizing on lap number forty two. Ryan Diatte has been on the move all night, after starting in twenty second, Cannon makes contact with Wilson in one and two, leaving us three wide for second.

We take time for a brief caution, after Wilson gets a spin from Molnar, leaving Casey to fire back off for the final eight laps over Cardwell, Brown, Diatte and Bishop in fifth. Dylan Houser works the bottom in sixth, Cardwell trying every possible line to catch the Kid Excitement, Jordan Casey, who only needs to hold on for three more laps. White flag in the air, Casey uses the top side all the way to the bottom, Cardwell goes to the extreme top, leaving a questionable second place spot for a second and third.

One question we will not have to ask, is “Who got the checkered flag”, that’s the number forty two Greg’s Speed Shop and Diatte Racing Innovations machine of Jordan Casey Second place goes to the fifty seven of Ryan Diatte after starting nearly last, and Clifford Driskel in third.

Congratulations again to Jordan Casey on the win, as well as our podium finishers, thank you to out Admins, along with all of the sponsors who make this league possible and FVRN for an amazing broadcast as always.

Knoxville may be known as the Sprint Car Capital of the World, but next week, it’ll be the Late Models turn to make a name! I’m sure it’ll be another edge of the seat style race, so until then, this is Katie Dugas with Pit Pass, Signing off. 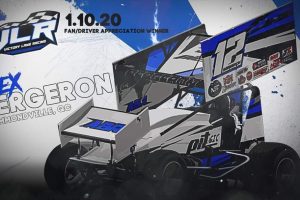 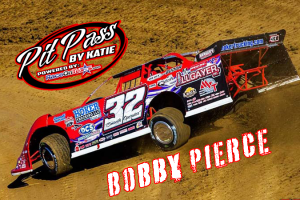 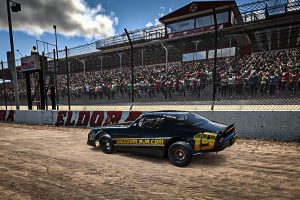