Jennings powered to victory in a talent-filled affair for the Limited Modifieds; Maupin prevailed in a hotly-contested tussle for Factory Stock warriors, while Dear was triumphant in the Pure Stock class.

Jennings, of Corpus Christi, inherited the lead when Ray Allen Kulhanek's engine went up in smoke at lap 17. Kulhanek's car was billowing smoke for several laps, to the extent that Jennings stopped on the backstretch at one point to bring a significant oil leak on the No. 33 entry to Pittman's attention.

Trent Beaver, of China Grove, wheeled his way up from eighth on the 23-car grid to finish second, while local favorite Cody Beddoe filled out the podium with a strong performance. Brian Rye (Corpus Christi) and Kris Rye (Corpus Christi) finished fourth and fifth, respectively.

“We started out right up around the top,” Jennings told Pittman in SAMES Ford Victory Lane. “I was hoping to get some lapped cars in between me and Ray, hoping they'd get in the way. It was a good, fun race, and I hated to see that when Ray's engine quit.

“I hate to win one like that, and I hate to see anybody burn an engine up like that because they're pretty expensive. I'll tell you what, that wasn't any fun to follow when he was leaking oil. I have to thank my whole family, and of course the fans for coming out to support us. It was quite a night, I'm thankful.”

Finishing sixth through 10th in the Jude Allgayer Racing Limited Modified A feature were Jarrett Barber, Jaden Edmond, Marcus Mikulencak, Jared Maupin and Ziggy Reusser. Two cautions slowed the pace (laps 2, 12), one for Robert Boyd and another for a spin by Gilbert Perez III.

Maupin, of College Station, drove to the inside of early leader Chuck Perry coming off Turn 4 to take command at lap seven and pulled away to earn his 25th feature victory of 2022. Cody Leonard drove up from 10th at the start to finish second, while Kulhanek started 12th and finished third.

“We worked on this car, and it paid off for us tonight,” Maupin said. “The top was really narrow to hit just right, and I knew eventually he (Perry) was going to bobble. So I figured if I just kept hitting the middle, I could pounce when he finally did slide up. Right after that restart, he did it on the first lap.”

Finishing sixth through 10th in the Factory Stock feature were Nathan Rachui, Joey Heinaman, E.J. Gilpin, Jarrett Barber and Megan Dodson. Only one caution slowed the pace at lap five when Dodson spun her machine around on the front stretch.

Dear, of Corpus Christi, led all 20 laps of that caution-free Pure Stock feature in convincing fashion. Jerry Walters started on the pole and crossed the stripe in second, while Hudson Mikulencak filled out the podium after starting seventh on the 11-car grid.

“Using the high side was my plan the whole time,” Dear said in Victory Lane. “I knew Jerry and Curtis would be on the bottom, so I stuck to the top and never saw anybody else up there. I need to thank my girlfriend for letting me do all this stuff; Wayne Rachui, Darrell, Mark and everybody else who helps.”

Finishing sixth through 10th in the Pure Stock feature were Curtis King, J.C. Paul Jr., Parker Titzman, Alexis Powell and Emma Hendricks. Dear's margin of victory was approximately 10 car lengths. The Pure Stock division is a great place to start out for anybody looking to test the waters of oval racing.

With ideal weather conditions, 91 entries were on hand Saturday night spread across six divisions. Pittman and his fine staff knocked out 13 qualifying heats and all six features in record time; waving the final checkered flag at 9:35 p.m. Central time. Pittman loves a quick show, and he got it this week.

You can replay all of the action from Saturday night's great show at South Texas Race Ranch with a subscription at RaceOnTexas.com. With over 350 events on the Live streaming schedule this year, its home to some of the best content found anywhere online. 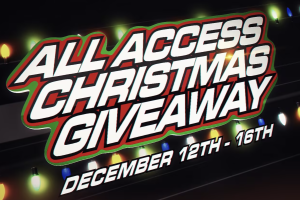 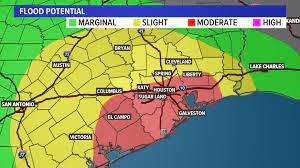 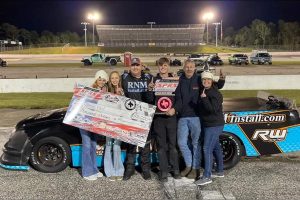