Hartline powered to victory in the 20-lap A Main for USRA Modifieds, Round 3 in the track's new Rocket Challenge; Day prevailed in a hotly-contested feature for USRA Limited Modifieds, while Hicks was triumphant in a torrid battle for USRA Factory Stock warriors.

Hartline, of Ivanhoe, Texas, drove underneath early leader Shawn Gammage to take command at lap nine and pulled away to a convincing win. Wendall Bolden crossed the stripe in second, while Wayne Melton filled out the podium.

Mitchell Clement drove from eighth on the 17-car grid to finish fourth, while Gammage faded to fifth in the closing laps.

“I kinda like it when there's a little bit of stick out there,” Hartline told veteran promoter Kevin Rogers in Ballistic Trailer Sales.com Victory Lane. “It was a tough deal tonight. I appreciate the hard work that went into the track surface. I want to thank all the fans for coming out; they make this sport what it is.”

Hartline's margin of victory over Bolden was a whopping 3.677 seconds, as he was on rails all night.

Day, of Greenville, Texas, led all 20 laps of his feature but had to fend off one of the region's top veterans for the win. Billy Brierton kept the pressure on Day all race long yet settled for second, while Rowdy's father, Jimmy Day, finished third to complete a sweep of the podium for Greenville drivers.

“We're doing everything we can to stay up front this year,” Day said. “These cars are getting faster and faster every week. We had some issues last night at 67 Speedway, but we got it all put back together.

“We tried a few things tonight to see if the car would like it, and she really didn't like it too much. So now we know, and we won't do it next time.”

Hicks, of Powderly, Texas, led all 20 laps of his feature yet had to fend off a hard-charging Jeff Hammitt to prevail. After tangling earlier on with Deaon Redmon, Hammitt recovered nicely to make a valiant attempt to overtake Hicks.

Redmond hung on for third, while Billy Davis drove from 16th on the grid to finish fourth. Billy White also did his fair share of passing, wheeling up from 10th to complete the top five.

“It's been going pretty good here lately,” Hicks said in Victory Lane. “I finally got my motor lined out; and the track has been awesome. I want to thank my sponsors for their support, and of course my lovely wife for all she does. Things are really coming together for us this year.”

Finishing sixth through 10th in the By-Line Surveying USRA Factory Stock A Main were James Proctor, Jesse Freelen, Bobby Glover, Brandon Betts and Nicholas Kirby. Only two cautions slowed the pace, one for Bryce Pritchett's broken axle and the other for that Redmon/Hammitt tangle.

Hicks' margin of victory over Mr. Hammitt was a scant .547 seconds, as the 'Pride of Edgewood, Texas,' was hungry to win after finishing third at 67 Speedway on Friday night.

The dynamic promotional team of Rogers and Kevin Sustaire have refined their product since they first opened Rocket Raceway Park. The veteran promoters and their capable staff drew 85 entries on Saturday evening, yet knocked out a great show in just a little over three hours. They waste no time.

You can replay all of the action from Saturday night's Rocket Challenge and regular divisions program at Rocket Raceway Park with a subscription at RaceOnTexas.com. Choose one of three options (OnDemand, ASCS National Tour Only, or All Access), select your favorite track and start enjoying great content (over 350 races shown Live in '22) while supporting our sport. 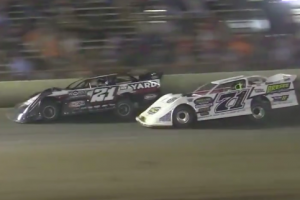