CORPUS CHRISTI, Texas (Dec. 9, 2022) —  Rising star Beau Begnaud has always known how to win big races, it's why he's one of the hottest commodities on the talent-filled Texas short track scene. And while it may be mid-December, he still carrying a ton of momentum as we close out another year.

Two rounds of Heats were held for the Limited Modified, Factory Stock, Pure Stock and EMod classes, while Heats and features were contested for Late Models and Mini Mods. Michael Lindsey was the surprise winner in Mini Mods after James Parks III suffered mechanical failure on the final lap.

Begnaud, of Spring, started to the outside of polesitter Ray Allen Kulhanek in the ASCLMS A Main, and quickly jumped out to the lead. His patience was tested frequently, as numerous incidents plagued the feature. Yet he held on for top honors, with Kulhanek settling for second and Kevin Sitton in third.

“The car was still a little tight in the feature,” Begnaud told world class announcer Rodney Rodriguez in Sames Ford Victory Lane. “But we worked on it all night, and it improved. The track started blowing off a little bit, and the car got better the longer we ran.

“I didn't know if those cautions would ever end, it got pretty frustrating. We stuck it out, and were able to get it done. I've been down here a couple of times just to watch, but this was actually my first time driving a car here. I'm glad we could come away with a victory tonight, it feels pretty amazing.”

When it was time for Factory Stock to qualify, the depth of talent on hand cranked up the heat. In Round 1, Hector Aguirre, Memphis Villarreal, Frank Okrulik and Cameron Starry won their Heats,  while Tryton Temple, Cody Tesch, Dalton Faulkner, Dylan Elasko and Chuck Perry won in Round 2.

Teams from all over the Great State of Texas, Louisiana and points beyond filled the pit area on Friday evening. With a whopping 46 Limited Modifieds leading the way, 143 entries spread across six classes put on a show for fans in the stands and those watching at home.

You can replay all of the action from Friday's Qualifying Night for the South Texas Shootout at South Texas Race Ranch with a subscription at RaceOnTexas.com. With over 300 events already streamed Live this year, its been home to some of the best short track content found anywhere online.

With new Apps on the way, 2023 season promises to deliver more great broadcasts on a variety of platforms from high-quality venues than ever before. Join the growing RaceOnTexas family today, watch tonight's exciting A Mains from Corpus Christi and get ready for the Holidays in fine style. 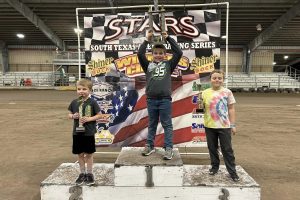 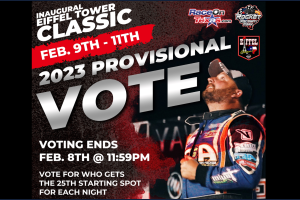 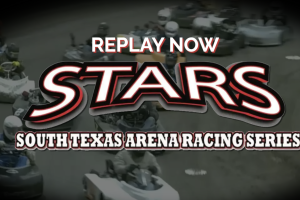