MANDEVILLE, Arkansas (May 13, 2022) — Late Model veteran Brandon Ball and the ever-versatile Justin Whitehead scored wins in their respective divisions, as officials presented a full card of weekly racing on Friday evening at 67 Speedway of Texarkana.

Ball powered to victory in the 20-lap A Main for CRUSA Crate Late Models; while Whitehead went 2-for-2 on the night with his triumphs in Factory Stock and Limited Modifieds. Justin Converse (Tuners) also scored a feature victory on a beautiful, summer-like night for racing in northwestern Arkansas.

Ball, of Texarkana, Texas, led all 20 laps of that Crate Late Model battle. Clayton Stuckey kept up the pressure throughout yet settled for second, while Jon Mitchell filled out the podium. Jarret Stuckey and Garrett Gibson completed the top five.

“I'm still having a little overheating issue with the car,” Ball told veteran Ark-La-Tex region announcer Zach Clark. “It's showing pretty hot on the gauge, so I tried to baby it around so it wouldn't get too hot. The track is getting better, at least it was smooth this week.

“I hate it that Jon (Mitchell) was having problems, so I didn't get the best out of him tonight. He would have been up there, for sure. But you take Clay and Jarret (Stuckey), they've come a long ways and they're getting better every time out. I hope to see more cars come out, this is going to be a nice track.”

Rounding out the finishing order for the Crate Racing USA Late Model A Main were Dalton Patrick and Chris Gardner. While only seven Late Models were on hand, the class has potential for the future.

No cautions slowed the pace, while Ball's margin of victory over Stuckey was a healthy 1.617 seconds.

Whitehead, of Texarkana, Texas, earned his first win of the night in Factory Stock. The skilled chassis builder and versatile wheel-man drove inside of early leader Luke Wheat coming off Turn 2 to take command at lap 13 and managed to hold off a hard-charging Neil Kemp for top honors.

Kemp got by Wheat in the closing laps to secure a runner-up finish, while Wheat ended up third. Lee Carver (Lockesburg, AR) and Daniel Lamphier (Eagletown, OK) rounded out the top five.

“I think Luke (Wheat) had a good enough car that he could have won that race,” Whitehead said. “It only takes a little room down low on a track like this. He was probably a little too nice to me; he could have shut the door on me and I'll tell him later he probably should have.”

Only two cautions slowed the pace, both for minor incidents. Whitehead's margin of victory over his pal Kemp was a scant .217 seconds, less than the blink of an eye. Wheat put in a career-best effort against some of the sport's top talent.

For Whitehead's second triumph of the evening, he drove to the inside of Connor Mewborn coming off Turn 2 to take control of the feature on lap six and was never challenged. Mewborn crossed the stripe in second, while his older brother Colby finished third.

“The owner said this car had some handling issues, and we found a huge one,” Whitehead said of his second win of the night. “He said it was too hot to race, so he asked me to come drive it. I'd say we cured the handling problems, because man, that's a hot rod.

“I was able to really fire off good on the restarts. Connor didn't stay low enough; I don't know if he could have in Turn 3. I was waiting for him to slide up, and he did. He's real fast, he's going to have some wins under his belt for sure. We had a little $20 bet going into the night, but we called it off.”

Only one caution slowed the pace, that coming out before a full lap was completed when several cars came together in Turn 4. After a quick cleanup, things got settled down for 20 laps of good racing.

You can replay every lap of Friday night's weekly program at 67 Speedway of Texarkana with a subscription at RaceOnTexas.com. With over 350 races on the Live streaming schedule this year, it's your best value for top-notch online short track entertainment.

Sign up today by choosing one of three options (OnDemand, ASCS Sprint Car National Tour or All Access), select your favorite track and start enjoying loads of great content while supporting the sport. 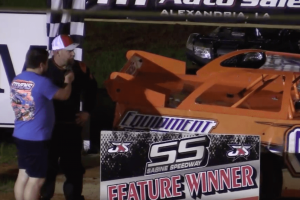