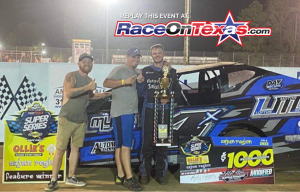 Adams earned his first career victory in the A Main for STSS Modifieds; Mitchell broke out of his usual Late Model gig to dominate the Limited Modified feature; while Myers prevailed in a hotly-contested feature for Factory Stock warriors.

Adams, of Haughton, Louisiana, drove to the inside of Anthony Meek coming off Turn 2 right after a restart at the halfway mark and hung on for top honors. Meek, who led seven laps, settled for second, while series point leader Caleb Dillard finished third after leading the first three circuits.

“I've always liked this place,” an elated Adams told veteran announcer Collin Bell in Victory Lane. “We've been struggling all year trying to get this win. It's probably one of the hardest ones I've had, this is an awesome group of fast racers. I need to thank my Dad and everybody who helped me get here.”

Adams became the series' fifth different winner in six races held thus far in 2022. The next event for this dynamic tour was slated for July 23 at Revolution Raceway Park (The Rev), but has been moved to Ark-La-Tex and will feature more high-speed, wheel-to-wheel entertainment.

Mitchell, of Texarkana, Texas, led all 20 laps of his feature in convincing fashion. Adam Roy, who had the fastest car in the closing laps yet ran out of time, finished second, while ageless wonder Ricky Ingalls drove from ninth on the 20-car grid to finish third. Ingalls went three-wide often to get there.

“That was a fun race tonight,” a relaxed and casual Mitchell said after his victory. “I just wanted to give this Limited Modified deal a shot; they're got some good-paying races coming up and we decided to go after a few of them. We'll be headed for the Mike Parker Memorial next week to go after that $5,000.”

Finishing sixth through 10th in the Limited Modified feature were Ricky Burk, Aaron Roy, B.J. Moore, Chris Hall and Dustin Taylor. Only one caution slowed the pace at lap four when Logan Griffin's car went up in flames. He climbed out quickly on his own power and was not injured in the incident.

Myers, of Bossier City, drove to the inside of early leader Dustin Durham coming off Turn 4 to take command of his feature at lap three and sailed away to top honors. Bo Perry started seventh on the 20-car grid, drove a smart race and finished second, while regional stalwart Kyle Cummings was third.

Ricky Ingalls (Longview, TX) capped another strong night of racing in fourth, while Clint Shurtleff recovered from a quick spin just past halfway to finish fifth.

“This win means a lot to us and comes at a great time,” Myers said. “We tried some new stuff tonight; people were saying we've been good here and we wanted to keep up our momentum. I really appreciate all the people who make this possible, I couldn't do it without them.”

Finishing sixth through 10th in the Factory Stock A Main were Dustin Durham, Hayden Brown, Joshua Daugherty, T.J. Evans and Dustin Henigan. Two cautions slowed the pace, both for minor spins. The Factory Stock division was born in this region and continues to entertain fans with great racing.

It was a full house in the pits at Ark-La-Tex on Saturday, with a whopping 125 entries spread across six divisions. With 30 Factory Stocks and 24 Limited Mods alone, just the weekly classes were loaded with talent. Mix in a series' record 22 STSS entries (it's their second year) and you've got a packed program.

You can replay all of the action from Saturday night's incredible STSS Big Block Modified show at Ark-La-Tex with a subscription at RaceOnTexas.com. With over 350 events on the Live streaming schedule this year, its home to some of the best content found anywhere online.