MANSFIELD, Texas — In the past year or so, we've looked at the depth of talent across North Texas at places like Kennedale, Boyd, the former RPM Speedway in Crandall and now Rocket Raceway Park in Petty. No matter the division, it's tough to win once, let alone for two straight weeks.

Just don't tell that to fourth-generation racer Trey Smitherman, who won his second consecutive feature last Saturday night at KSP by inches in a drag race to the line over regional strongman Chris Davis. Smitherman, 26, has won twice in four starts this year and was inside the top-10 on all four occasions.

If promoter James Lopez had a new specialty sandwich at his concession stand, it could easily be called “Smitherman on a Roll.”

“The first two nights of this season, it seemed like we had a really good car,” Smitherman said. “But about halfway through the features, the car would fall off because I was over-driving it. I was actually pretty frustrated with it, and really wasn't happy at all.

“Last week, we had a decent Heat race, ended up on the pole after the redraw and it was a dry-slick, one-lane track. I knew if I could just hold the bottom, it would be my race to lose. As long as I didn't make any mistakes, I had it in the bag. I held on, and we ended up with the victory.”

The manner in which he went 2-for-2 this past weekend was about as good as it gets for any driver.

“It was a hard-fought battle, for sure,” Smitherman admitted. “We really had to work to get that one. I knew when we pulled out onto the track, I had to get to the top pretty quick. We kind of gambled with the setup we had in the car, and it was one of those rare times when it paid off for us.

“I tried to get out in front of Dylan (Moss) on the start, and was able to get out enough to move up to the top. Once I got out there, I felt him on my back bumper as he was trying to make a move. Ruben (Broussard) bumped him got the lead, but I got it back and felt like I had a good gap on them.”

As it goes with most races you think you're about to win, there can be moments where doubt creeps in.

“I had almost a straightaway lead when the caution came out, and I heard them say in the radio that Chris (Davis) would be lining up on the bottom. If there was anybody I didn't want down there, it was Chris. He would be the only guy who could make that work. I knew there was going to be a battle.

“He made sure of it, but we raced clean the whole way. The only time we got together was down the back stretch, I think he thought he had me cleared and we touched just briefly. He said after the race he was having to open up his entry to Turn 3 because the tire was out further. He ran me clean to the end.”

This proud young racer is now in his 16th year racing full-size cars, and he's done well from the start.

“I got my first Kart in 1999 when I was just four years old.,” Smitherman explained. “I grew up three miles from the old Cowtown Speedway, which is now Kennedale. I won a lot of races and the title in 2003. I moved up to cars when I was 10, and in 2011 I ran in Junior Bombers.

“When I advanced to the adult Bomber class, I won the championship over my Dad when I was 15. We had been taking smack to each other for weeks; it came right down to the last night of racing. We won a $1,000-to-win race at KSP two years ago, and finished second at the $4,000-to-win race last year. We went down to Houston, and raced on asphalt with the same tires I use on dirt. We qualified second, won our Heat race and ended up winning the feature by .005 seconds. I've been fortunate over the years.”

As we mentioned before, the level of competition in North Texas is about as stiff as it gets in the state.

“I tell people all the time, we have the toughest competition in the state at Kennedale,” Smitherman added. “You look at Devil's Bowl, for example, and they have one or two guys who are really fast. If they go to any other track,they're fast there, as well. Yet at KSP, you have eight or nine of those guys.

“That's what makes it so hard. You can have a guy with a 10th-place car ever week, then all of a sudden they show up all dialed in and pull off a victory. So the list of potential winners grows all the time. I love this class because, I can go just about anywhere and race, but it's always tough in North Texas.”

When this red-hot racer grabs his helmet, suits up and gets ready to race, he straps into a unique car.

“What's funny about these last two wins is the fact I wasn't even driving my own car,” Smitherman said with a chuckle. “I was driving my Dad's car, since I'm still building my new one and it just isn't ready. We have what we call Smacker Chassis here; we've built five so far and mine on the jig is Number 6.

“I own and operate Limitless Performance Fabrication, and work on race cars for a living. Me, my Dad and some friends have built these Smacker cars based on Justin Whitehead's Outlaw cars. I've been to his shop, shown him our work, and he guides us in a kind, helpful way. We're no threat to him at all.”

So as dozens of racers around the state spend close to $30,000 for a top-of-the-line Factory Stock, this guy simply built his own. Oh, and all five built to this point have done very well. It's a great story here.

Along with his immense natural talent and hand-built, rocket ship of a race car, Smitherman also has several key people and partners on board who keep his program on-track and successful.

With the season in full swing and plenty of racing straight ahead, Smitherman has some goals in mind.

“I found in the past that chasing points can take the fun out of racing in a heartbeat,” he concluded. “So these days, we chase wins and try to have fun in the process. I just love to work for my customers, help them get faster and try to do the best I can with our own program. I'm having a big time in 2022.” 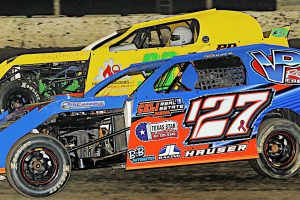