MARKSVILLE, Louisiana — Among the dozens of talented, dedicated racers across the beautiful state of Louisiana, one 14-year veteran of the ovals stands out among his rivals. His mother worked inside the fences for years, and his own driving career started to deliver results over a decade ago.

For 27-year-old Stephen Guidry, the ultra-competitive Limited Modified division is his playground. He's been on a tear in his native state and around the Ark-La-Tex area this year, with two wins, nine top-five and 14 top-10 finishes in 17 starts. He's got speed and consistency, elusive for many racers.

“We kind of took a step back during the off-season,” Guidry said. “We pulled the car apart, and I won't say started over, but went all through it very thoroughly. This is third season in the newer of two Express Race Cars we have here from Shane Hebert.

“I actually worked for Shane a while building cars while I was attending the University of Louisiana at Lafayette. This year, we haven't really done things much different than in years past; but the luck part has gone our way. We've stuck to the basics, and so far this year it's worked out pretty well for us.”

Guidry has been around the sport most of his life, since his mother, Liz Domite, was involved on the promotional side back in the day. His own career got started in 2008, and really took off in 2010.

“I was kind of what you might call a field filler when I first got started,” Guidry explained. “So I guess that makes it 14 or 15 years we've been doing this now. I started racing Karts when I was six, but as far as full-size cars, it wasn't until 2008 that I climbed into one.

“I raced off and on after my Dad passed away in 2002 when I was just seven years old. My Karting slowed down after that, since my Mom was helping promote and run a race track here in central Louisiana. She helped them put on their Saturday night shows.”

It wasn't too long before his desire to get back behind the wheel brought Guidry back to the ovals.

“As I got a little older, she let me get back to Kart racing,” Guidry said. “I got my first IMCA Southern Sport Mod in 2008 when I was 13 or 14. So that's when I guess you could say it started to get serious. I kinda struggled with it at first, but in time, I got the hang of it and started to make a little progress.

“We didn't really find success in this Limited Modified class until 2010. That was really my first full season in the seat. My Mom had gotten out of the track promotion role, and we were dedicated to our own racing program at that point. I clicked off three wins that year, and won the title at 15 years old.”

Guidry was fortunate enough to be around one of Louisiana's short track icons when he was young.

“One thing that really helped my career was the opportunity to travel around and race with Mr. Ronny Adams,” he explained with pride. “I didn't do much except scrape mud off his car back then, but now I realized I picked up more knowledge than I thought just being around Ronny and my Dad back then.

“Ronny almost became like a second father to me over the years. I still see certain things around the shop, think about my Dad and Ronny, get choked up and shed a tear. And I probably always will.”

Yet you can rest assured, ol' Papa Guidry and Ronny are watching the boy this year – and smiling.

“I know those guys are up there, and are looking down with smiles and are proud of what I've accomplished in my career, and what we're doing this year. So that makes me smile, as well.”

As mentioned above, the level of competition within the Limited Modified ranks around the Ark-La-Tex is off the charts. It's tough to do well, yet it's also forced Guidry to step up to the plate.

“No matter where we unload, there are tons of fast guys looking to take home the trophy,” he said. “So it's never easy to win or land on the podium. Yet racing against the best there is makes us better; it forces us to work harder, find more speed, and really step it up to compete. So it's good for us, really.”

When Guidry puts on his safety suit, grabs his brain-bucket (some may call it a helmet) and gets ready to race, he crawls into a mighty fine machine.

“I love these Express Race Cars in my shop from Shane Hebert,” Guidry said with great pride in his voice. “Shane builds a top-notch car, and I still have a great relationship so I can call for guidance when I need it. Shane's guidance, along with Earl Baxter of 41 Shocks, is why we're running this strong.”

Along with his raw natural talent behind the wheel and top-notch race car, Guidry also has a couple of key people and several valued marketing partners who keep his program on-track and successful.

“I have a small crew here that consists of my mother and my Fiance, Erika Shook. They do a ton for me, and I could never do this without them. I appreciate their support more than they'll ever realize. My mother has been right there since the start, and Erika is as supportive as I could ever hope.

With weekly racing starting to wind down and all of those 'Fall Specials' looming in the weeks and months ahead, Guidry has a few boxes he'd like to check off his list before 2022 draws to a close.

“We're not far away from all those big shows, and we have a few of them circled on our calendars,” Guidry concluded. “We don't chase points anywhere during the summer, we're out just doing our best and trying to learn. It's a lot of work for me, my Mom and Fiance, but we're having a blast in 2022.” 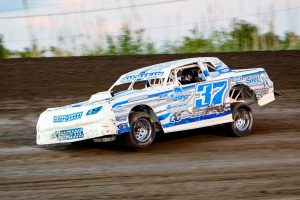 Day Motor Sports Driver Profile: Jeffrey Abbey has lots on his plate in 2022