ALVARADO, Texas — While you may think Central and South Texas have the market cornered on top-notch Factory Stock action, it's more than competitive in North Texas, as well. It may have been born in the Ark-La-Tex region, but to win races in North Texas, you better have it all together.

For 34-year-old second generation racer Jeff Hauser, this division is a place to showcase his talents. He's off to a solid start this season, earning a win and two top-five finishes in five starts. It hasn't all been golden, but he's on the right track and gaining speed all the time.

“We're struggling a little bit,” Hauser said. “We have a new car in the works we've been trying to finish, so that makes it a challenge. We would have a couple more wins, but we got wrecked while leading. I think we are going in the right direction, we just need to learn how to escape without any damage.”

Now in his 20th year of racing, Hauser has driven a variety of vehicles around the Great State of Texas. As the son of successful former racer Roger 'Doogie' Hauser, Jeff is carrying on a family tradition.

“I started out when I was 14 years old in the Bomber class,” he explained. “We ran that car one year at Cowtown, then I moved over to Kennedale. I've pretty much raced there my whole career, but I have also driven I-Stocks, a Modified and in Outlaw Street Stocks. If there's an open seat, I'll get in it.

“I drive for my Dad. He's driven everything in his career, including Late Models and Modifieds. So I'm carrying on a family tradition, you could say. My Dad actually just drove the Sport Mod on his 57th birthday, and he had a blast. He hadn't driven in two years, but he did a very respectable job with it.”

Jeff's own career has produced some memorable wins, even if you do have to pry it out of him.

“Dad and I both have points titles in our careers, but right now the focus is on winning big money races,” he explained. “I won the 2020 Factory Stock title at Kennedale, and they say if you can win there you can win anywhere. We also won a big race at TMS that year, so that was my best year so far.”

As mentioned above, that level of competition in North Texas is above as stiff as it gets anywhere.

“It's insane up here, it really is,” Hauser said. “Especially at Kennedale, where you're right in the middle of the DFW Metroplex so you get all of the top guns. But some of them travel around, as well, so no matter where you're at it's the cream of the crop up here. I want to run against the best, and I do.”

When Hauser grabs his helmet, suits up and prepares for competition, he straps into a rare machine.

“We've got this brand new Generation Race Car by Justin Long, and I'm pretty excited to get it rolling,” he explained. “I know Michael Dabney has been stomping them and we're hoping to give him a run for his money. I'm very fortunate that my Dad is retired and is able to put so much time into the car.

“He's been working his butt off all day and most nights trying to get it finished, while trying to keep with the car we're still running at the same time. It's been a challenge, but the reward is in sight. The car we're running now is one Justin built in 2018, and it'll get us by nicely a little while longer.”

Along with his immense natural talent behind the wheel, Hauser also has several valued marketing partners that keep his program running strong all season.

With summer's heat here and wall-to-wall racing every weekend, Hauser knows what he wants to do.

“We're after more wins, and will go wherever the highest competition can be found,” he concluded. “I really like going after those big money races, not just the purses but you get to race against the best and see how you stack up. It's a way to measure your skills. We're just out chasing trophies, having fun.” 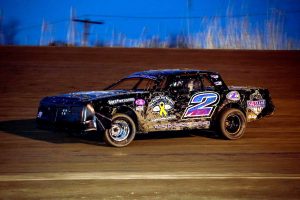 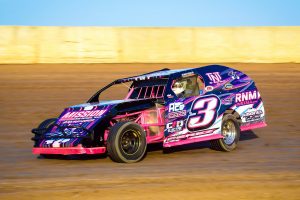