BURLESON, Texas — When a racer lowers his head, digs deep and keeps striving for success, he will eventually find it. When exactly it all comes together can depend on a number of factors; from equipment and team chemistry, to the blessings of simply having a little old-fashioned good luck.

For 35-year-old Factory Stock pilot Brett McMillin, the 2022 season has been one to remember. In 25 starts, he's earned five wins, including last Saturday's $5,000 Eddie Prator Classic at Big O; 14 top-five and 18 top-10 finishes. This eight-year veteran of the ovals hung in there, and it has paid off in spades.

“In the last couple of years, we had been right there in those big shows but never could quite seal the deal,” McMillin said. “Something just always fell apart. Last year we had some issues in post-race tech, which hurt us some.

“This year, at Boothill's big King of the Hill event, I drove from 13th up to second and got into it with the 56 car. I over-drove the corner a little bit, and ended up flipping the car. So it was a huge relief to finally get it done this past Saturday night.”

When you look at the factors responsible for McMillin's strong season, the finishes all make sense.

“We work really, really hard on the car during the week,” he explained. “When people say races are won in the shop, no truer words have ever been spoken. That's been the key to our success. We're fortunate enough to have one of the best setup guys around in the form of my car owner.

“I drive for David Redmon, and he's super knowledgeable. He hosted a Setup School a couple years ago; and a lot of guys go to him for their setups. As a driver, I can tell him what the car is doing and he knows exactly what to adjust to make it better. That relationship with him is why we do so well.”

Much of McMillin's career has been spent racing at Kennedale Speedway Park, and he's better for it.

“I've been around racing all of my life,” McMillin explained. “My Dad raced ever since I was a kid. We spent all of our Friday nights at Boyd Speedway, and all of our Saturday nights at Cowtown Speedway, which was where KSP sits now.

“I think I was 18 years old when they first introduced the SportMod division as a Budget class. I raced that for one year, and was terrible at it. So I sold the car, got out of racing and didn't race again for 10 years. I got back into it when I got married. KSP is my home track, it's five minutes from my house.”

McMillin says last Saturday's victory was the biggest of his career, but there have been other moments.

“Winning the Eddie Prator Classic was obviously my biggest win so far, but I won my fifth race back a number of years ago in one of the original Big Body cars. That car was kind to me, I still miss it today.”

Wherever he unloads his car in North Texas or over in Louisiana, McMillin knows it will be difficult.

“It's always tough to run up front, yet there are reasons why I absolutely love this division,” he added. “For one, it brings drivers of all skill levels together on a level playing field. Another is that it provided the chance to race against my Dad, which was pretty special. There's just so much big talent every time out in Factory Stock, it forces you to improve and work harder. It makes you a better racer.”

When McMillin puts on his safety suit, grabs his helmet and gets ready to race, he climbs into a unique race car. It isn't quite the brand new, state-of-the-art piece you might think he drives.

“I drive a car that's roughly 10 years old car built by David Redmon,” he explained. “It's a BMF chassis and he's built a couple of other cars around the local area. He used to build a lot of them, but this may be one of the last cars he actually built himself. He's old-school and does some excellent work.

“As for horsepower, our built motor wasn't ready for the start of the season, so we borrowed an engine from Jeff Martinez to get us by while we were waiting. When we finally got all the parts, David, Kyle and Uncle Ronny built it right here in the shop in the back of a pickup. We put it in for Boothill.”

Along with his obvious boatload of raw natural talent behind the wheel and that decade-old killer BMF chassis, McMillin also has several good people supporting his efforts.

“First and foremost, I need to thank my biggest supporters; my wife, Nicole, and my entire family,” he said. “My father and brother are always right there by my side whenever I need them. Racing is what brings us all together every Saturday night. That's another reason driving for David and Shelley Redmon is so awesome. They understand how much family means to us, and I need to thank them for giving me the opportunity to drive their car.

“There are better drivers out there than me who would love to be driving for them. David is one of the best in the business. I also want to thank Kyle Harrison for all the work he does during the week, and at the track; 'Uncle' Steve for his help when we get tight on time. We really appreciate it.”

McMillin is also blessed with a fine group of marketing partners that help his program be so strong.

“I need to thank these great companies for their support, including Pitt Stop Cafe in Kennedale, Bret Young with Performance Transmission; Jeff Martinez with EJ Towing; Don Wilde with Don Wilde Racecraft; plus Buddy Baker and Charlie Wilson with B&C Gear. I couldn't do this without them.”

With summer quickly winding down and those Fall Specials looming large in the weeks ahead, McMillin knows what he wants to accomplish before all is said and done in 2022.

“We have the Shootout and Showdown at KSP, and the Cajun Classic circled on our calendars,” he said. “Those are two shows we'd really like to win, and after last Saturday we know we are capable. We'll just keep doing the maintenance, driving hard and give it our best. That's what got us here.” 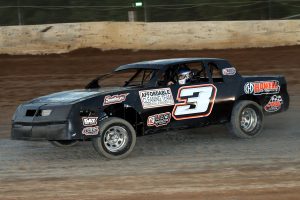 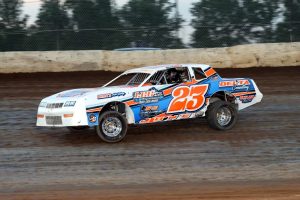 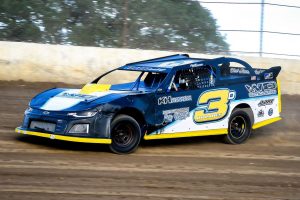